Rafa Munoz Perez, a Spaniard serving with the rebels in Donetsk, wears a Spanish Republic wristband

French, Spanish, Swedish or Serb, the foreigners fighting for both sides in east Ukraine’s bloody conflict hail from across Europe and come with a bewildering array of agendas.

The non-mercenaries among them are motivated by causes which can stretch back to the wars in the former Yugoslavia – and even further still, to the Spanish Civil War of the 1930s.

Russia is the elephant in the room, dwarfing any other foreign nationality, although it is increasingly hard to disentangle Russians fighting as volunteers from regular soldiers allegedly deployed on covert missions.

Ukraine’s pro-Russian rebels like to talk up their foreign volunteer fighters, presenting them as latter-day International Brigades fighting „fascism”. Meanwhile there has been some debate in Kiev on the wisdom of creating a Ukrainian „Foreign Legion”.

Here we look at some of the foreign fighters by country of origin, in a phenomenon which, in a small way, mirrors that of young Muslims from Britain and other parts of Europe travelling to the Middle East to fight in its wars.

It is no secret that Russian citizens have occupied senior posts among the rebels, the most famous of them being Igor „Strelkov” Girkin, who reportedly held the rank of reserve colonel in Russia’s Federal Security Service as late as last year.

There is strong evidence that rank-and-file Russian fighters have entered east Ukraine to join the rebels, but whether they are volunteers making common cause with ethnic Russians in Luhansk and Donetsk, or mercenaries, is a grey area.

Rebel leader Alexander Zakharchenko has stated publicly that between 3.000 and 4,000 Russian „volunteers” have fought for the rebels since the start of the uprising in April.

„There are also many in the current Russian military that prefer to spend their leave among us, brothers who are fighting for their freedom, rather than on a beach,” he said on 28 August.

Evidence has mounted that regular Russian soldiers are involved, with 10 paratroopers captured inside Ukraine and indirect evidence of military casualties at home in Russia.

Chechens, both from Russia’s Republic of Chechnya and from the anti-Russian diaspora living in exile, are believed to be involved on both sides of the conflict, but predominantly fighting for the rebels.

A gunman who presented himself as a Chechen called Ruslan Arsayev told the Mashable news website in an interview he was fighting for Ukraine because he wouldn’t „bend over for Putin”.

At the scene: Oliver Carroll, journalist working in Ukraine

A number of foreign fighters serve in the Aidar volunteer battalion currently fighting in east Ukraine. Chechen Ruslan Arsayev is perhaps the most colourful example. An army veteran of six military campaigns, Ruslan came to Ukraine to fight during the Maidan revolution. He was injured twice, once seriously, when a bullet punctured his lung.

He comes from a well-known family of warriors. One of his brothers was security minister in Aslan Maskhadov’s rebel government. Another was convicted of hijacking a plane en route to Moscow in 2001, an action that resulted in the loss of three lives.

At the Aidar base near Luhansk, Ruslan explained he had come to Ukraine because of Putin. „Putin has turned my home into Stalin’s Russia, with a dozen informants on every street,” he said. He wasn’t prepared to accept Putin’s rule, and predicted an uprising in Chechnya in the „very, very near” future.

Some 20 French citizens have gone to Ukraine to fight on both sides, French public radio station France Info said in a report (in French) on 11 August.

Four of them, including two former soldiers, went to Donetsk to fight for the rebels. They were filmed by Russian newspaper Komsomolskaya Pravda posing with guns.

Their spokesman is Victor Lenta, 25, who earlier told France’s Le Monde newspaper (article in French) he had been a corporal in the Third Marine Infantry Paratroop Regiment and had served in Afghanistan, Ivory Coast and Chad. Another member of the group is Nikola Perovic, also 25 and with Serbian ancestry, who likewise reportedly fought in Afghanistan as a corporal in France’s 13th Mountain Infantry Battalion.

They told Le Monde they were the founders of an ultra-nationalist movement called Continental Unity, which has organised demonstrations in France and Serbia in support of Syrian President Bashar al-Assad and Serbian war crimes suspect Vojislav Seselj.

In their view, according to Le Monde, Russia is the final bulwark against liberal globalisation which they consider „responsible for the decline in national values and loss of French sovereignty”.

Their main role among the rebels, apparently, is to provide combat training for recruits from West European countries.

Gaston Besson, on the other hand, has been fighting for the Ukrainian government as a member of its Azov volunteer battalion, a unit known for its far-right associations.

Aged 47, he nonetheless describes himself as a „leftwing revolutionary”, according to France Info. Reported to be a former paratrooper, he is said to have fought in previous conflicts ranging from Croatia to Colombia

He is known for his efforts to recruit other foreigners and, according to a Eurasianet article, wrote in June: „Every day I receive dozens of requests to join us by email, especially from countries like Finland, Norway and Sweden.”

At the scene: Pierre Sautreuil, French journalist working in Ukraine

I met the French volunteers for the first time on 9 July in a bar in Budapest, Hungary. Up until then, our exchanges by phone had been brief and their answers evasive.

The rules for this first meeting were simple: they pose the questions. They feared I might be a French intelligence agent. „We can’t trust you yet.”

After a long series of questions about my background, and my opinions on the Ukrainian crisis, they asked for my passport and photographed it several times.

„We have nothing but enemies in intelligence,” one of them told me, handing back my passport. We said our goodbyes.

Next day I got a phone call: „Our friends have completed their little investigation. You’re clean. We’ll meet at 19:00.” And thus began my investigation.

For two Spanish leftists, the conflict in east Ukraine represents a chance to repay what they see as a historic favour.

Angel Davilla-Rivas told Reuters news agency he had come with his comrade Rafa Munoz Perez to fight for the rebels in recognition of the Soviet Union’s support for the Republican side in the Spanish Civil War.

Mr Munoz, 27, is a former social worker from Madrid who has been a member of the youth wing of the United Left political movement since 2010, Spain’s El Pais newspaper said in an article. His friend, 22, is from Murcia and belongs to the youth wing of a branch of the Spanish Communist Party, the paper added.

Mr Davilla-Rivas showed off tattoos of Soviet leaders Vladimir Lenin and Joseph Stalin on his torso.

„I am the only son, and it hurts my mother and father and my family a lot that I am putting myself at risk. But… I can’t sleep in my bed knowing what’s going on here,” he told Reuters.

There are also reports of Spaniards fighting on the government side, according to an article in the Kyiv Post.

Dozens of Serbs are believed to be fighting for the rebels, ostensibly drawn by an ethnic and nationalist sense of solidarity with the region’s Russian Orthodox Christians and residual hostility towards Nato, regarding the Ukrainian government as its proxy.

However, Belgrade-based security expert Zoran Dragisic told German broadcaster Deutsche Welle in a report that Serbian fighters were primarily fighting as mercenaries and could be found on both sides in Ukraine.

„It’s indoctrination that draws young people – some of them almost children – to war,” he said.

Meanwhile, there are moves within Serbia to stem the flow of fighters heading east with a law that penalises participation in a foreign war.

In an interview with the BBC’s Dina Newman, a Swedish sniper with far-right views, Mikael Skillt, said he was fighting for the Ukrainian government because he believed in the „survival of white people”. Like France’s Gaston Besson, he is a member of the Azov battalion.

„I would be an idiot if I said I did not want to see survival of white people,” he said. „After World War Two, the victors wrote their history. They decided that it’s always a bad thing to say I am white and I am proud.”

At the same time, he added that he planned eventually to fight for Syrian President Bashar al-Assad because he believed Mr Assad was standing up to „international Zionism”.

Reports that Poles were fighting in Ukraine prompted the government in Warsaw to formally deny that Polish citizens were fighting as mercenaries for the Ukrainian government. It went on to warn that any Poles who go there to fight could face jail upon their return, Deutsche Welle reports.

Leonid Smolinski, a 49-year-old Polish citizen born in Ukraine, was killed in a rebel ambush on 12 August while serving in Ukraine’s Dnipro volunteer battalion, according to Euromaidan Press.

At least one Pole has also sided with the rebels. In a speech in the rebel capital Donetsk, carried by radical Polish website xportal, Bartosz Becker described himself as a representative of „Polish free people who are against Nato terrorist bases in Poland”.

Margarita Zeidler is a former nurse who moved to Ukraine in 2002 for religious reasons after converting to the Russian Orthodox Church, according to an interview with Komsomolskaya Pravda newspaper (in Russian).

Dismayed by events in Kiev during the Maidan uprising over the winter she moved initially to Crimea, then to Donetsk region, she said, after one of her friends was shot dead there in May. She became the rebels’ information officer in Sloviansk during its siege by government forces.

While she describes herself as a journalist, she told the newspaper that she always keeps an assault rifle „within reach”.

Speaking in Russian in a video posted on YouTube on 11 August, she said she could not „stand by and watch Ukrainian fascists kill civilians”.

Despite rebel allegations to the contrary, there is little evidence of American volunteer involvement on the ground. The exception was a Ukrainian-American called Mark Gregory Paslawsky, who had taken Ukrainian citizenship.

Paslawsky, or Franko as he liked to be known, was killed fighting for the Ukrainian government side in the embattled town of Ilovaisk. In an interview for Vice News, the 55-year-old West Point graduate and investment banker from New York had explained he wanted ultimately to help root out corruption in Ukraine, saying „the political elite has to be destroyed here”.

Russian media suggest that there are US citizens fighting for the rebels too.

Francesco F, 53, enrolled in the Azov battalion to „fight a good fight against Russia”, the Italian weekly Panorama reported in an article (in Italian) in June.

Already doing business in Ukraine two years before the violence erupted, he said he had „found his home alongside Ukrainian nationalists” on the Maidan barricades.

Francesco, who also featured in a video report by Il Giornale, has a past in the far right in Italy, according to Panorama.

Other nationalities are reportedly involved in the conflict, probably in small numbers.

Citizens of Georgia, Belarus, Baltic states, Finland, Norway, Canada, Croatia, Slovenia and the Czech Republic, as well as Russia, are said to be involved as volunteers on the government side.

Rebel leader Alexander Zakharchenko said on 17 August that his foreign volunteers also included a number of Turks and Romanians. 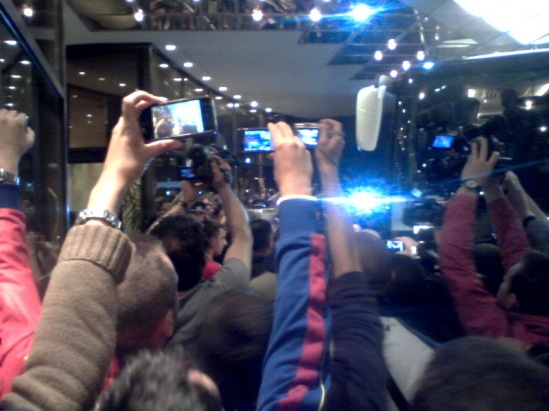